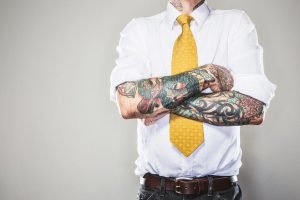 Two very popular past Astronology articles are 2008’s “Facial Hair in the Office? Pros and Cons” and “Readers Response: What are Typical Policies Regarding Female Employees with Tattoos and Body Piercings?” Has much changed in the past eight years since we’ve last discussed these topics? In this issue of Astronology we explore changing policies on facial hair, tattoos, and scents in the workplace.

With the growth of “Movember/No-Shave November,” an Australian originated annual event to raise awareness of men’s health issues such as prostate cancer, the popularity of various forms of facial hair has increased.  In fact, a 2013 study conducted by the American Mustache Institute noted that “71% of Americans surveyed said they work with a ‘Mustached American male or female’.”  As a result, some organizations have revisited their facial hair policies.  For instance, Disney began allowing beards and goatees in the workplace in 2012. The HRZone website commented that events such “Movember” give organizations the opportunity to promote men’s health and well-being in the workplace.

According to a 2010 Pew Research report, nearly four out of 10 surveyed Millennials have a tattoo.  Half of that number have two to five tattoos.  18% have six or more tattoos.  With Millennials already in the workforce, and in some cases taking leadership positions, the attitude towards tattoos slowly has been changing.  A 2013 Forbes article quoted consulting firm CEO John Challenger as saying “Even in this tight job market, most companies aren’t going to view tattoos too harshly. Companies have a vested interest in hiring the most qualified candidate.”  To follow, Bank of America spokeswoman Ferris Morrison expressed, “We have no formal policy about tattoos because we value our differences and recognize that diversity and inclusion are good for our business and make our company stronger.”  A USA Today online article suggests the current struggle to totally include employees with body art stems from three areas of concern:

All three concerns are understandable. So where can employers meet in the middle with their employees?  It’s helpful that many employees and candidates are aware of the concerns organizations have with tattooed employees, and have taken matters in their own hands by having tattoos hidden by clothing or make-up. The same Pew Research report mentioned above also found 70% of tattooed Millennials say their tattoos are hidden beneath clothing.  Organizations are also within their rights to create tattoo concealment policies that fit their corporate cultures and don’t infringe on employees’ rights.

Fragrance concerns is an area our previous articles did not discuss.  According to a survey conducted by the University of West Georgia, 30% of people find scented products irritating.  People with asthma or chemical sensitivities may find some strong fragrances harmful, as the scents can trigger allergy-like symptoms. In recent years there have been concerns about offensive fragrances, with resulting lawsuits:

As a result, the concern around crafting fragrances policies has grown. This particular policy is challenging to design.  Depending on the workplace environment, deciding how far an accommodation an organization can reasonably provide can be difficult. The recent Brady v. United Refrigeration case serves as an example of this challenge. Although the employer tried to make what it considered to be “reasonable accommodation,” the employee still had challenges from scents in the workplace. Brady alleged that as a result of her continuing health concerns, she was fired. In June 2015 the employer’s motion for summary judgment was denied.

The best place to start in discussing such policies is with legal counsel. These areas are ever-evolving.  Getting current legal advice on how to best handle these areas will keep your organization’s environment safe and productive.

Does your organization have a facial hair, body art, or fragrance policy in place? Please share with Astronology! We love hearing from our readers!