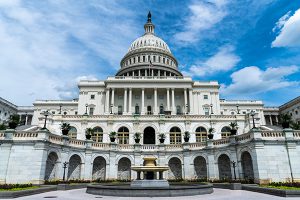 As the dust settles surrounding last week’s midterm elections, Human Resource professionals naturally ask, “How does any of this affect HR?” In this Astronology® we discuss some changes to anticipate in the coming months.

A Majority Democratic House of Representatives + A Majority Republican Senate + A Republican White House = What?

The headlining result from this year’s midterm elections is that the Senate remains majority Republican meanwhile the House of Representatives has become a Democratic majority. What does this mean for HR?

The House of Representatives, the Senate, and the White House are the three powers that check and balance each other for legislation. When these powers are led by differing political parties, we can expect much friction, or even an outright halt in new legislation. Ric Edelman, co-founder of Edelman Financial Engines and author of “The Truth About Retirement Plans and IRAs,” hypothesizes that “…You’re going to see a lot of bills being offered and they’re not going to go anywhere. We’re going to see gridlock for two years and everybody will be positioning themselves for 2020.” Despite this, MarketWatch highlights some labor issues that may be pushed forward in the coming months:

Fisher Phillips notes that with a Republican led Senate, certain appointments could be moved forward. They suggest keeping an eye on the United States Department of Labor (USDOL) and the Equal Employment Opportunity Commission (EEOC) for new key leadership personnel. Fisher Phillips also notes that there could be more discussion on the Affordable Care Act (ACA), immigration (which could impact labor laws for immigrants), and labor & employment matters.

While the Federal government election results often take center stage, equally important to review are the winners for your State Assembly and Senate. For instance, in New York, the Senate has shifted to control under the Democratic party. As a result, topics such as marijuana legalization and reproductive health could be given a larger spotlight. These topics could result in HR representatives having to adjust benefits and / or work policies in order to accommodate possible new legislation.