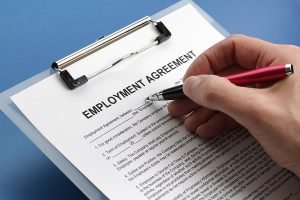 In today’s information economy, the protection of proprietary information is becoming even more essential. Employers, in increasing numbers, are requiring employees to sign so called “covenants not to compete,” or non-compete agreements. A covenant not to compete is an agreement that the employee will not work for a competitor for a specified period of time. In addition to confidentiality agreements, this is a powerful tool to prevent employees from misappropriating proprietary information such as trade secrets, or client information and supplying it to competitors. Such agreements also prevent employees from poaching clients and starting their own firms.

Employees who pose the greatest risk to theft of proprietary information should be required to sign these agreements. Thus, courts are far more likely to enforce a non-compete against an engineer or an accountant, than a janitor.

There are numerous pros and cons of requiring employees to sign non-compete agreements. In some cases where the risk to proprietary information is high, they are a necessity. In other situations these factors should be weighed to determine if one is necessary.

Some advantages of non-competes are that they:

On the other hand requiring employees to sign a non-compete can create tension between employees and employers, and may induce some employees to quit immediately. It may also be more difficult to attract talent, as incoming employees may be reluctant to sign a non-compete. Moreover, such agreements may be found unenforceable in court. Even if the agreement is enforceable, the costs of enforcement can be prohibitive. Enforcing such agreements often requires the retention of an attorney and the initiation of a lawsuit which can cost an organization thousands of dollars in legal fees.

Covenants not to compete must be reasonable in terms of the following three areas:

1. Duration: Courts will generally not enforce a non-compete that has a duration longer than two years. The shorter the duration, the more likely courts will find the agreement reasonable.

2. Geographic Scope: It becomes more complicated when deciding the geographic scope. The scope must be limited to the area where the business primarily operates. For example, an organization that does most of its business in New York, New Jersey, and Connecticut must limit its non-compete to those states. Most nationwide non-compete agreements are unenforceable except for high level employees at large corporations.

3. Industry: Non-competes must be limited to the particular industry of the employer. For example, a company that produces semi-conductors cannot prevent an employee from working in a restaurant or other unrelated industry.

Overall these agreements must be drafted in a way that satisfies their purpose of protecting proprietary information, while not being excessively burdensome on the employee. These agreements are not always looked favorably upon by the courts.  The courts have placed limits on the scope and reach of non-compete agreements. Thus, employers must weigh these advantages and disadvantages when deciding whether to require employees to sign a non-compete. All agreements should be reviewed by counsel before asking an employee to sign it.